With the spread of marijuana for recreational and medical use, parents are expressing more concerns about the impact on their children. They are seeking addiction resources.

There are many ways to stay informed and find solid guidance to address challenges. Several recently released books, videos and articles aimed at preventing marijuana use and debunking common myths about this addictive drug and the burgeoning, Big Tobacco-like industry surrounding it are worthy of consideration: 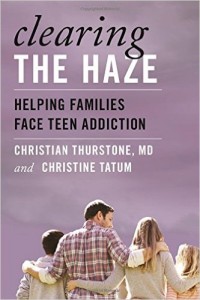 Clearing the Haze: Helping Families Face Teen Addiction Written by Dr. Christian Thurstone, a psychiatrist specializing in the treatment of adolescent substance use disorders and associate professor of psychiatry at the University of Colorado, and his wife, journalist Christine Tatum. You can find them online at DrThurstone.com.
The book includes the voices and insight of experts in substance abuse counseling, young people in recovery, and parents who have lived the nightmare of adolescent addiction. It moves readers through an overview of adolescent brain development, the warning signs of drug use and addiction, treatment options, what families should expect of therapy, the basics of productive communication, and the difficulties of dealing lovingly with addicted teens.

A Common Struggle: A Personal Journey Through the Past and Future of Mental Illness and Addiction By Patrick J. Kennedy and Stephen Fried
Former U.S. Rep. Patrick Kennedy explores his own struggle with mental illness and addiction, and how it has affected his family and late father, the renowned and widely respected U.S. Sen. Ted Kennedy. Patrick Kennedy, a co-founder of Smart Approaches to Marijuana, a nonprofit, volunteer organization that opposes marijuana legalization, attempts to blow the lid off the stigma of mental health and addiction in the U.S. Using sound data gleaned from public records and the findings of reputable research, he explains the challenges we face as a nation and what we, as individuals and communities, can do about it. He maintains that the country already has too many problems with substance dependence and addiction — and government regulation — for Americans to believe expanded drug legalization could happen without devastating consequences.

Marijuana Debunked: A handbook for parents, pundits and politicians who want to know the case against legalization By Dr. Ed Gogek
Gogek, a psychiatrist living in Arizona who has decades of professional experience working in correctional systems, presents the propaganda and myths purported by marijuana advocates and the industry. He takes each apart piece by piece, using science and statistics to show that while marijuana may not be a huge evil, it is not necessarily good for society and is increasingly putting the most vulnerable people in society at risk.

Reefer Sanity: Seven Great Myths About Marijuana By Kevin Sabet, Ph.D.
While serving at the White House Office Of Drug Control and Policy under three presidential administrations, Sabet found that marijuana legalization posed too many risks to the health and safety of the American public. In this book, he lays out why, busting common myths about marijuana that are driving states and communities to go about legalization without appropriate regard for the interests of public health and safety. He proposes smart policies and approaches to marijuana policy that protect the most vulnerable, including and especially youth. Sabet is also a co-founder and director of Smart Approaches to Marijuana, or SAM. He is also online at www.kevinsabet.com.

The Other Side of Cannabis (documentary)
This film focuses exclusively on the negative effects doctors, substance abuse professionals and parents have seen on the mental health of youth who have used marijuana. It specifically focuses on how marijuana use in adolescents can bring about mental illness at young ages, including psychosis and schizophrenia, which cannot be reversed, only managed. Filmmakers also show other negative impacts marijuana use can have in terms of hampering school performance and causing accidents.

An American Epidemic (documentary from Steered Straight, Inc.) This film explores the general epidemic of widespread opiate and prescription drug abuse and overdoses among America’s youth and how it is causing many parents to lose their children forever. Using first-person testimonials, the film attempts to explain what has led to this national health crisis and what Americans can do to stop it. The film also explores how our country’s substance abuse treatment networks are broken and how people are not getting the help they need. See the trailer here. As the filmmakers note: “Share with your community. We offer the Public Performance Rights you’ll need. If you have any questions please contact us …”

Clearing the Haze: A Perspective Series By The Editorial Board of the (Colorado Springs) Gazette
This series of editorials from the Gazette explores the real impact of legalization in Colorado since the state’s boom in medical marijuana dispensaries in 2009 and sanctioning of recreational legalization in 2014. The Gazette’s Editorial Board debunks myths spun by the marijuana industry and compounded in local media throughout the state. The series is solidly sourced with science citations, data found in public records and personal stories from those facing the brunt of marijuana’s negative impact. Marijuana legalization has been a grand failure so far, the editorial board explains.